When I started working with Japanese cuisine, the biggest problem I faced was not carrying a 20kg box of salmon or cook an octopus 15kg but the prejudice that involves the preparation of ritual food made by a woman. I said very often:

– But you are a woman, you can not touch the fish, your hand is hot …

People were very surprised to see me with my yanagi (knife) cutting a beautiful slice of sashimi, but surprised there were still customers who asked that the “Sushiman” was to table to thank and I appeared … But it was good because at that time I could explain that it was not so, that the story is just a story and that much is lost or changes to go a long way (one half of the globe) here. If you want to know the name Sushiman is something to see American (rs) as the correct name of who makes sushi is Itamae-san or Sushi-a-san, and women can indeed handle the fish.

In the story I transcribe below, taken from Wikipedia says that the stalls selling fast food, the sushi rolls were on the streets and for obvious security reasons, were the men who did; already in their homes, the sushi (usually consumed in festive days) were made by their wives.

History of sushi – Its origins date back to the fourth century B.C in Southeast Asia. then used him a lot of cooked rice to save salted fish through the rice fermentation. Months later, the rice was discarded and the fish consumed. The origin is unknown, but became famous from the Japanese cuisine.

Origin – Japan withdraws from the sea the main foods that make up your kitchen. Fish, seaweed and seafood are present in virtually all Japanese cuisine. The land is hilly and there are few places where you can develop agriculture. Rice is a high production culture on small areas.

The sushi is a food that has ancient origins. Previously, in Japan, the fish to be transported to other places they were preserved in the cooked rice. The Japanese knew that rice freed acetic and lactic acid that would guarantee the quality for longer. Thus, the head and the fish entrails are removed and the filet was preserved by salting it and packing it between the layers of rice, where the fish fermented naturally, getting a sour taste. The technique was also used by fishermen who were fishing on the high seas, thus creating the pressed sushi.

The fish preservation technique was gradually turning into a dish, and the resulting acid flavor of fermentation was replaced by acetic acid, commonly known as vinegar. Finally, the fish and the rice with vinegar now have the shoyu, further enriching its flavor.

By the fourteenth century, the Japanese, very fond of rice and started to consume not only fish but also the rice before this ferment. This raises the namanarizushi, which originated types of sushi known today.

In the Edo period (a century old), rice becomes seasoned with vinegar and fish due to the abundance of fish and seafood in Tokyo Bay, it happens to be eaten raw and fresh. thus came the hayazushi.

Basically prepared with rice, fish and seafood, sushi has become fashionable in many Western countries, for its exotic flavor and pleasant and to be recognized as one of the healthiest cuisine in the world.

Etymology – The term known as sushi is Japanese. It is also written in kanji (Chinese characters) for ancient Chinese dishes which bear little resemblance to today’s sushi.

Sushi in Japan – In the early nineteenth century, when Tokyo was still called Edo, appeared in the streets the Yatais, tents where people ate quickly. At that time, niguirizushi arises, the perfect wedding onigiri (rice balls) and raw fish. The niguirizushi is also called Edomaezushi because they were used fish, seafood and seaweed taken from Tokyo Bay, typical products of Edo.

Hanaya Yohei, considered the first sushi chef in history, became famous to improve the taste, shape and simple presentation of sushi, that is, introduced the custom to taste it with your hands, without the use of chopsticks.

In 1923, there was the great earthquake of Tokyo, which caused many sushimen leave the city and return to their home provinces, spreading the sushi across the country.

Since 1980, the United States, diffuses the idea that Japanese cuisine, especially sushi, is healthy, which caused the so-called “boom sushi” around the world, with the opening of sushi bars, casters sushi, robots for use in their production etc.

The contemporary sushi is characterized by offering new types of sushi with the adoption of own culinary elements of each country, together with the technical and inspiration of sushimen. According to the chef Carlos Watanabe, “contemporary sushi or fusion emerged in countries whose culinary identity would not be rooted in very strict gastronomic cultures, allowing unusual experiences that combine traditional culture with the local culture and its various influences, attracting more and more people of eclectic tastes and eager for new experiences. “

Sushi in Brazil – As all aspects of culture cuisine receives the influence of local culture. Traditional sushi also receives the interference of Brazilian cuisine. It is very common to find that sushiman develop modalities of sushi with own characteristic. 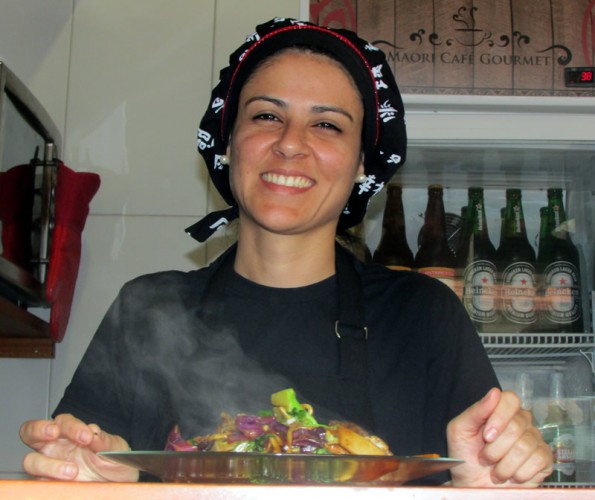