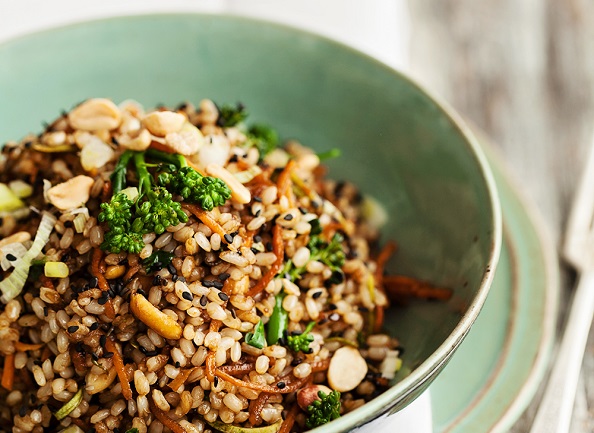 A while ago I wrote a story about the growing and unacceptable waste of food that exists in the world, from the production to the refrigerators of the final consumers. To illustrate ways to reduce such waste, I gave the recipe for a different and delicious rice cookie.

Now let’s talk about rice, its varieties and consumption advantages, after all it is one of the most consumed foods in the world and a “super joker” in the kitchen, since its recipes go from traditional white rice, vegetable milk and even a beautiful gnocchi.
Rice is the third most produced cereal in the world and its cultivation is as old as civilizations, so its origin is still controversial. Consisting of seven species of cereals, rice in Brazil is almost mandatory in all dishes consumed daily, mainly with beans, its most classic way of being served.
Because it is rich in carbohydrate, rice has already been labeled a villain and has now been respected, especially in gluten-free diets because it does not have this substance in its composition. Research has proven that people who consume a daily portion of this cereal, white or whole, have less body fat and more minerals, such as potassium, iron and magnesium, which help balance blood pressure and cholesterol levels. Moreover, its intake prevents diabetes, because of the amount of starch, which controls blood glucose.

Some types of rice and its benefits (source: conquistesuavida.com.br):
– White rice: Contains carbohydrate and its main function is to provide energy. Although it is the most consumed in Brazil, it is the least nutritious, because the vitamins and minerals are in the bark, which is removed during the polishing process.
– Brown rice: A rich source of fiber, minerals and essential oils, it stimulates the intestine, increases satiety and reduces body fat absorption.
– Black rice: Rich in antioxidant properties, it aids in the prevention of cell damage and chronic diseases such as diabetes, cancer and cardiovascular problems.
– Red Rice: Contains monocolin, a substance that helps digestion, reduce cholesterol and prevent heart disease.

– Wild rice: It is actually another type of grain, but many consider it as rice. Rich in proteins, fibers and amino acids, it is also the one with the least amount of fat. Good ally for restrictive diets.

Any grain should be soaked 6 to 8 hours before being prepared, changing the water at least 4 times and with rice is not different, because it contains phytic acid or phytate, an enzyme inhibitor, in its outermost layer . And since the whole grains are not pre-processed or fermented, this acid is not neutralized. Phytate hinders the digestive process and generally binds to some proteins and minerals in the intestinal tract, such as calcium, zinc, iron and magnesium, and can prevent its proper absorption and assimilation by the body. Therefore, phytate is considered an antinutritional factor of some foods.

When we leave the grains of sauce, enzymes and other substances in them can neutralize phytic acid, making their proteins, minerals and vitamins are more easily absorbed by the body. In addition to neutralizing phytic acid, leaving the grains of sauce also helps to “break down” partially other proteins of difficult digestion.
Today’s recipe is a healthy and fresh option to face the hot days ahead, Brown rice salad with cherry tomatoes and arugula.

Method of preparation:
In a frying pan heat the butter, brown the chopped garlic, add the rice, the salt and the saffron, stir until well blended. It does not need to heat much, ideally it stays at a pleasant temperature, but not hot. Add the sliced ??onions, roughly chopped arugula and chopped tomatoes in 4 parts. Serve immediately, great choice to accompany a grilled fish fillet.

Important tips:
– To make brown rice it is not necessary to “fry” it. Add garlic and onion, add water and lastly the rice, this helps to cook faster and make it softer.
– When using butter, give preference to Ghee, which lacks lactose and its highest smoke point. For more information about Ghee and where to buy it, visit www.intensegourmet.com.br/loja/manteigas-pates/ghee-manteiga-sem-lactose/

This revenue yields an individual portion. Enjoy your food !

Written matter for the Jornal A Cidade Ubatuba